A new major movie, FATIMA, inspired by the story of the apparitions of Fatima in Portugal, will be released worldwide in theaters from April 2020. This movie is “a powerful and uplifting drama about the power of faith”, based on the story of a 10-year old shepherd and her two young cousins in Fatima, Portugal, who report seeing visions of the Virgin Mary.”

The film details their courageous response during which they faced ridicule, persecution, and punishment from within their own family, their local community, and the government. Throughout they maintained their childhood innocence while also remaining true to their mission of bringing a message of peace to the world.

FATIMA was filmed as an epic feature in Portugal and includes actors such as Harvey Keitel, Sonia Braga, Goran Visnjic, Joaquim de Almeida, Lucia Moniz, and Stephanie Gil in the iconic role of the Little Seer, Lucia. Directed by Marco Pontecorvo, and featuring an original song “Gratia Plena” performed by Andrea Bocelli, FATIMA is a profound, beautiful and authentic homage to the human story behind the apparitions and miracle of Fatima.

The World Apostolate of Fatima has been a part of this project, right from its initial stage of production and it is with delight that we see it coming to reality. The film will be a rare opportunity for the Apostolate to promote the meaning and message of Fatima to a wider public.

Prof. Americo López-Ortiz, international President says that the film FATIMA “presents the authentic Message of Fatima with a new perspective, appealing to our contemporary world; a drama unique in its call to those hungering for God’s intervention in history to bring peace and goodwill among humans. A beautiful cinematography serves as a background to a story based on true facts that portrays God’s love and mercy towards mankind.” And he adds that “it is a film that will move hearts in a positive way and that will be a reference for many years to come.”

The Rector of the Shrine of Our Lady of Fatima, in Portugal, has also endorsed the  movie, underlying that  “the film leads us to reflect that 100 years later, the light of God that the Virgin Mary shined upon Francisco, Jacinta and Lucia still lights the way for those who commit to a life of faith in the Gospel.”

The trailer of the film is available here. For more information, visit the webpage www.fatimathemovie.com

Centenary of the Death of Saint Jacinta Marto

The World Apostolate of Fatima, in conjunction with the Shrine of Our Lady of Fatima in Portugal, is convoking all of the faithful to join the great celebration of the 100th anniversary of the death of Saint Jacinta Marto, on the 20th of February 2020. On this day, the Church celebrates the liturgical feast of Saint Francisco and Saint Jacinta Marto, the Little Shepherds of Fatima, canonized on May 13th, 2017. 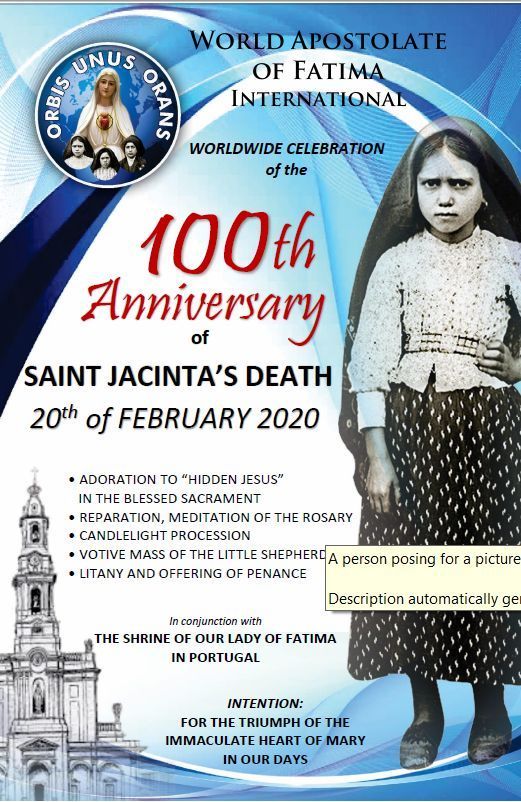 It is important that the heroic virtues of the two new saints are made known throughout the universal Church, presenting them as models for holiness. Saint Jacinta, a model of missionary and active life for the evangelization of the world. Saint Francisco, the consoler of God and the reparative soul. These are the two schools for sainthood.

The program at the Shrine of Fatima, in particular the celebrations held at the Chapel of the Apparitions, can be followed by internet through http://live.worldfatima.com

Commemorative Book on the Centenary of Fatima 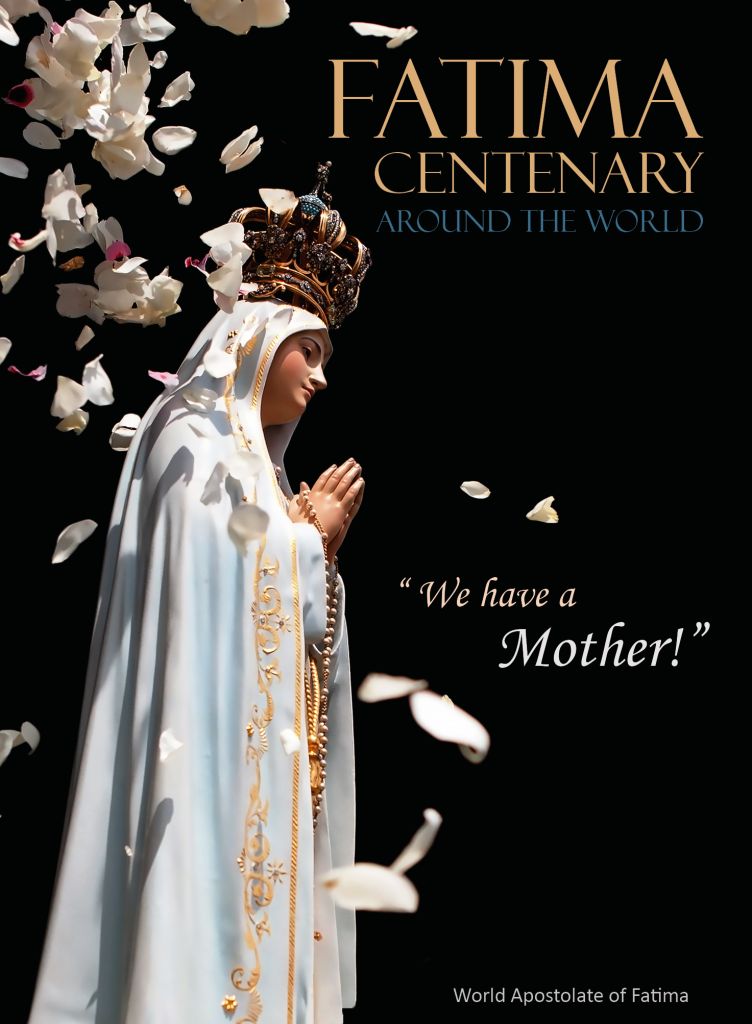 The World Apostolate of Fatima, through its Secretariat, published a commemorative book, in English, on the celebrations of the Centenary of Fatima, titled:“FATIMA CENTENARY AROUND THE WORLD”. The book was released to the public on October 13th, 2019, anniversary date of the last apparition of Our Lady in Fatima.

With 160 illustrated pages, this book offers the reader, through beautiful photos and texts, a summary of the main activities and celebrations of the World Apostolate of Fatima during year 2017, to mark the centenary of Our Lady’s apparitions in Fatima. A special dossier is also dedicated to the events held at the Shrine of Fatima, in Portugal, during this time, with a special focus on the pilgrimage of Pope Francis and on the canonization of Saint Francisco and Saint Jacinta Marto.

Leaders and members of the World Apostolate of Fatima, from Asia, Africa, Europe, America and Oceania, have contributed for the making of this book by sending their reports.

Prof. Américo López-Ortiz, the WAF international President, writes in the Editorial, that “this beautiful book we are offering you is not only a major souvenir of the ephemerides but moreover, an instrument for evangelization and catechesis to educate the faithful to comprehend and appreciate the marvels of the Heart of the Mother.”

The book is now available for distribution from the International Secretariat in Fatima. If you wish to have a copy of this book and treasure the everlasting memories of the Centenary of Fatima, kindly visit our online store at https://shop.worldfatima.com/

The main theme for this regional conference is “Mary, our Queen Mother of unity and salvation”. The meeting open to members of the World Apostolate of Fatima as well as to observers from the Oceania region, will focus on the pastoral work of the Apostolate, especially the new evangelization program in Oceania, drawn from the Fatima message, which presents a challenge also for this region.

The six days programme is outlined in such as way as to include various moments of prayer, that is, daily Mass, Rosary and Adoration. Alongside with this, there will be talks offered on the message of Fatima, such as the First Saturdays of reparation and the importance for our modern times, the meaning of the consecration of the world to God through the Immaculate Heart of Mary, as well as some other specific formation topics, of major concern for this part of the world.

In order to immerse also in the local culture, there will be a cultural evening and some sightseeing tours in the island. Those wishing to participate or to gather more information on the Congress, please contact the WAF International secretariat at: info@worldfatima.com

Formation Program on the Message of Fatima

This initiative comes in line with the thrust and top priority of the World Apostolate of Fatima which is “the formation of leaders, lay people and families according to the ever relevant and ever urgent Message of Fatima”, and is also the first fruit of the 3rd WAF Asian Congress which was held in February, at Calcutta, India.

The Formation Program of the Basic Seminar, developed in two main modules, will cover various topics, both about the catechetical elements of the Message of Fatima and about the communication skills of leaders.

The need for formation in the Apostolate is also a direct answer to Our Lady’s instruction to the three shepherd children when she said to on June 13, 1917: “I want you to learn to read…”. The leaders of the World Apostolate of Fatima must be fully equipped with the knowledge of the Message so that they can in turn properly evangelize and teach others to heed Our Lady’s call at Fatima.